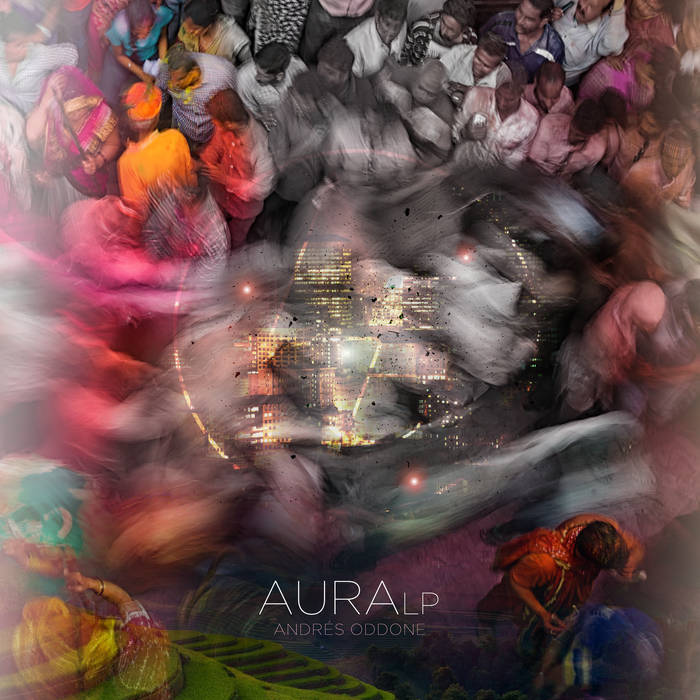 Phortah You can cleanse spaces with this album...
It's a deep document of Oddone's two journeys to India. I'm on one hand compelled now to go there, and on the other feel that with headphones and closed eyes I can go somewhere new with Aura...
Namaste

We are delighted to present "Aura" a remarkable release by the Argentine producer Andres Oddone inspired by his two trips to the country. "Aura" is a sonic interpretation of Andres´ time in India, like a musical photograph - fusing the music, life, culture and people he met and was exposed to during his time there. We could go on but we would prefer that Andre explains the project himself....

"Aura was born from two trips to India."

"In 2011 I was able to meet several artists, journalists and members of the Bangalore music world in the state of Karnataka, India. On that first trip I made recordings randomly, without knowing why, amid the intense shock generated by being in this place that was so strange to me.

"In 2013 I was invited by BangaloREsidency, of the Goethe Institut Bangalore, to serve in a residency together with a group of artists from different nationalities. The second time I traveled accompanied by Iohanna, my wife, and we were again in Bangalore, but also in several cities in the state of Kerala: Fort Kochi, Alleppey (Alappuzha) and Trivandrum (Thiruvananthapuram)."

"Both times I captured a large number of recordings of different spaces. Of TV programs, of what was playing on the radio, what I heard on the streets out walking or captured as a spectator at various concerts. I took samples - delving into complete discographies of artists from India, some well known and others who I came across by luck, in an archive of music ranging from religion-based to more popular music: what plays from the stereo systems of the tuk-tuks to songs from the movies. I also used several layers extracted from sound collections."

"There are three lines that intersect in the music on "Aura":

A - Dreams as a playing field: since it is impossible to mentally hold the information collected in India linearly, not even involving my own experiences, I decided to lay out the music with the same logic as that of the world of dreams.

Many of the central ideas of "Aura" were born from this concept of a "dreamscape"; such as the overall sound of the album, generally very low in tone, with few highs, dub, aquatic and atmospheric.

B - Trance as an organic composition: avoiding the obvious analogy (from a Western perspective) that occurs between "Indian music" and "trance", the notion of a hypnotic sound revealed itself as an opportunity that is much more, giving me the opportunity to explore and add different stylistic and sound worlds to the tracks. Thus, the pieces slowly began to be dressed in very distant elements but that take force from the same energy: acid, IDM, ambient, noise, minimalism, progressive sequences, climates of tension, etc.

C - Individuality and unity, all in one body: emphasizing the idea of "unity and multiplicity in a single entity" present in different visions of India, the tracks are composed by lots of sounds, sometimes touching on saturation. But within that complexity, an interlacing emerges that presents a double vision in which music can be read as a whole, or in which it is also possible to differentiate between different threads."

"In that sense, a sound created with a synthesizer is as equally important as a sitar or car horn, and they can be heard separately. But together they shape a whole that has its own voice, the body of a new entity. Collage leaves its seams in plain sight."

""Aura" was created from various random ideas and from playing with the sensuality of the sounds. It is not at all intended to truthfully emulate the rhythmic or compositional forms of India. I am far from being familiar enough to propose something like that."

"I am aware that the reality of this place is beyond the reaches of my comprehension, in every way. I think that understanding escapes even scholars who study the subject for years."

"Regardless, I hope that something from those trips shows itself playing in the music. That the wonderful people that I was able to meet can be found between these distorted pictures, and that they can enjoy the image."

Special thanks to the people at BangaloREsidency, your love and support are memories that I will treasure forever.
Christoph my friend, thank you for all.

Shika Shika is a record label without owners for music without borders.

We want to bring together producers from around the world exploring the line between organic and electronic music. The platform aims to foster global collaboration between artists, designers, videographers, product designers and creative minds across continents. ... more

Bandcamp Daily  your guide to the world of Bandcamp

Cannibal Corpse's George "Corpsegrinder" Fisher stops by for an interview